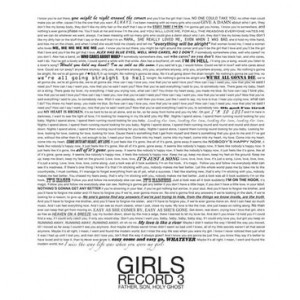 Best of 2011 Article and a few Song Selections

Sock Monkey Sound is running the annual best of lists over at their site.  Listen to a few selections from my favorite records of 2011 as well. Below are a few excerpts from the article, you’ll have to visit Sock Monkey Sound to read the complete list.

No other record brought me back repeatedly, swearing at its core simplicity, simple pop melodies and universal message– the wanting of love in any form. The love of a woman, mother, friends. The record’s haplessly divided by an epic centerpiece, Vomit, that wanders for the first four minutes until it’s spiritual climax. “Come in to my heart,” the band’s principle songwriter, Christopher Owens, proclaims above the gospel choir joining him in a Pink Floyd-esque crescendo. So goes the rest of the record; beautiful, devastating, pop music unafraid to pose it’s influences, with autobiographical lyrics coated in killer choruses . There’s an unbelievable amount of conviction within the performances, production, and songwriting, that elevates these eleven songs together. Father, Son, and Holy Ghost is an intense, religious-like, pop-rock listening experience that I turned to more than any other record in 2011, and will continue to.

An evil twin sister recording to Jeff Buckley’s “Grace.” If the devil has a voice and can play guitar, she’s it.

A large, lo-fi, middle finger to boring, domestic life, technology, and the death of the traditional family unit. Recorded with archaic, analog devices near (what appears to be under) a bridge in a large city– according to the notes accompanying this recording. At times sounding like 1,000 homeless men singing in mono on “Click, Click, Click” (track 11) segways to humorous – if not scientifically correct – warnings to mankind’s most irresponsible kine, “Husbands and wives, your children are getting fatter and not for the better. Click, click, click.” The most baffling, scientific, and politically-prophetic recording I’ve heard this year. Here’s hoping the mailman is as good to you as he was to me this year when this cassette-only release arrived with a PR kit loaded in rock n roll mythology and threats to my personal existence.

Daniel McMahon and Darren Garvey, servants of the studio and the road to many Midwestern bands, serve up 3 cover songs by artists they’ve recorded and performed with. Songs by Cameron McGill,Cory Chisel and Miles Nielsen are turned into Bob Dylan’s wild mercury sound in the hands of Francis Goes Solo. 8 minutes 38 seconds caught within one night of recording. Here’s hoping they drag these simple, bombastic, trash-can-glam-folk-rock-pop-punk tribute performances out for 35-37 minutes next. Garvey & McMahon’s Francis Goes Solo debut E.P. is what the true spirit of rock n roll should sound like- lighting in a bottle.

Smoking Popes – This is Only a Test

Josh Caterer composes a teenage rock symphony to youth and longing, and it’s not annoying! In the hands of other pop-punk bands (think anything Blink 182 or a lead singer that sounds like a crying goat- most of the emo rock genre) this would be a terrible, simple, idea- and unlistenable. The Popes prove they’re back full-force, whether anyone else is still listening to them doesn’t matter. The Midwest-pop-punk formula they introduced to the rest of the rock world in the 90s, that many bands emulated poorly, never tires in the hands of The Smoking Popes. “This Is Only a Test” is the most surprising rock listen of the year. Younger, wanna-be-post-emo-punk-whatever they call themselves, bands should take notes here; it starts with writing great songs, then, sing your hearts out. Something Josh Caterer & Co. still do better than most, including their own 90s, commercially successful, peers.[/twocol_one_last]